Civil War Veterans of Wilmette
Main Menu → Previous Page → Next Page
Frank Alson Alles, 1846-1940
Pages
Civil War Soldiers of WilmetteFrank Alson Alles, 1846-1940John Augustus Fiegen, 1820-1864John Andrew "Daddy" Hood, 1842-1939Francis Irving Jacobs, 1846-1919James Adelbert Mulligan, 1830-1864Milton Cushing Springer, 1837-1890Henry Thalman, 1839-1900Charles Pomeroy Westerfield, 1846-1922
Frank Alson Alles was the last surviving Civil War veteran in Wilmette at the time of his death in 1940. He was born 26 December 1846 in Winnetka, a son of Jacob Alles and Katharina Schmidt, both from Trier, Germany. He enlisted in the 39th Illinois Infantry in 1864 when he was 17 years old, serving with that unit as a private at Strawberry Plains Bridge in Tennessee; Richmond, Virginia; the siege of Petersburg, Virginia and at Appomattox Courthouse. It was at Appomattox that Alles was hit by shell fragments which tore through his haversack. He was saved from serious injury when the shrapnel hit his metal mess cup.

A Chicago Tribune article, published May 30, 1940, included brief statements from the 21 remaining Civil War veterans in the Chicago area. The article quoted Alles who once saw Lincoln near Richmond, “I thought he was a great man, but he didn’t look it.”

In 1889 an odd thing happened. Frank Alles left for work one day at the Gas Company of Wilmette with his dinner bucket on his arm, and didn't return home for twenty years. On 3 Feb 1896, seven years after Frank Alles' disappearance, Mrs. Alles was approved for a widow's pension of $12 per month based on her husband's Civil War service. The 1900 Census of Wilmette lists Katherine Alles, age 47, a widow, renting a house at the corner of Prairie and Wilmette avenues. Living with her are five children, John age 18, Mary age 16, Anna age 14, Frank age 12 and George age 10.

The story about Frank Alles' dramatic return from California in 1909 was reported in the Washington Times and locally in the Chicago Daily Herald, 26 Mar 1909, "Missing Man Returns Home: John Alles Welcomed home with "Dinner's Ready, John." The text of the story was furnished by a family member who feels the reporter confused Frank Alson Alles with his son, John F., in the article. The Library does not have copies of the original articles.

No Wilmette papers for the period exist to confirm the story, but, in the 1900 Census for Placer, California, Frank A. Alles, age 54, born in Illinois, is indexed as a single man. In the Wilmette Census of 1910, Frank Alles, age 63, is again listed with his family at 1614 Wilmette Ave. His wife, Katherine, was no longer described as a widow.

Other sources from California provide a physical description of Frank Alles. An 1893 voters registration list from Glenn, California, describes him as age 48, 5 feet 7 inches tall, with a florid complexion, blue eyes and sandy hair.

Katherine Alles died in 1915. Frank Alles lived at the 1614 Wilmette Ave. address until his death on 30 July 1940. His daughter, Helen Fischer, lived next door for many years at 1618 Wilmette Ave., and his son Frank Peter, lived nearby at 1612 Wilmette Ave. Funeral services were held at St. Joseph's Church in Wilmette. Burial was in Memorial Park in Niles Center [now Skokie], Illinois. The Wilmette Historical Museum has a copy of his death certificate.

Frank Alson Alles is frequently confused with his cousin, Frank Alles, 1861-1951, who married Barbara Schildgen 5 May 1885. Frank and Barbara Alles lived at 1636 Lake Avenue of Wilmette. 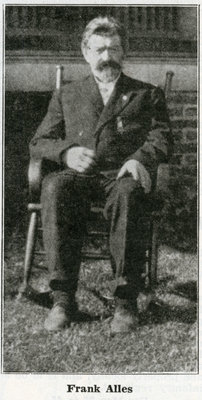 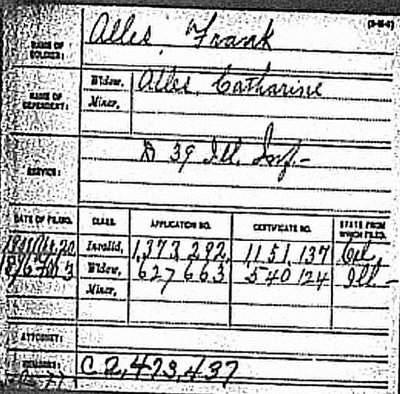