On last Monday night two versatile and enterprising crooks broke into the office of Edinger & Sneidel, dealers in coal and building material, 1301 Lake avenue, and with a pick and an old bolt, which they found in the back room of the office, forced open the safe and escaped with between six and eight hundred dollars. Several checks, amounting to more than one thousand dollars, were left, apparently intact.
A gang of men was at work moving a house on Lake avenue, just in front of the coal office, about 1 o'clock Tuesday morning, and as it had begun to rain, took shelter under the office shed. One of the men noticed that a window had been broken, and upon looking into the office he saw two men crouched in the corner near the safe. As soon as they burglars saw that they had been discovered they opened the door of the office and stood on the sidewalk for fully ten minutes talking to the house-movers. They told the movers that the office had been broken into, and that they were detectives searching for the robbers. After "visiting" for a while, they walked over to the Chicago and North-Western tracks and started running south in the yards. Then, and not until then, one of the movers had a brilliant idea and called the village police, who responded with their usual alacrity. Although a thorough search was made in the freight yards, no trace of the robbers was found. Two men, answering in a general way the description of the two robbers, were seen around the depot again on Tuesday night, but no arrests were made. On the night before the robbery three men were seen loitering on the west side, and when questioned by the police, said that they were going to catch the late north bound train. After this train had pulled out, the three men were again seen and rounded up by the police and "loaded" on to a north bound electric car. It is thought that if those men could be located and made to talk they could throw some light on the robbery. The police have been severely criticized for not arresting these men on a charge of vagrancy or as suspicious characters, as they had a perfect right to do. A stranger loitering around the village at midnight, who is unable to give a good account of himself, is a good subject for the village hospitality, at least for one night. Some one has suggested that the eight house-movers, who had such a pleasant little visit with the robbers, apply for positions on the Chicago police force. Without a doubt they would be received with open arms.

Media Type
Newspaper
Item Types
Articles
Clippings
Notes
Robbers pose as detectives when discovered and make their escape after good haul. No arrests are made. The men were evidently familiar with "the lay of the land" 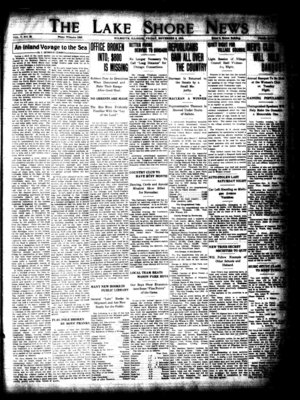