Milton C. Springer, a well-known and highly honored citizen of Wilmette passed away at 3:15 o'clock yesterday morning at his home on West Railroad avenue in that village. The cause of his death was paralysis, with which he was suddenly stricken down Thursday evening; for the past four weeks he was confined to the house, but in the twenty-five years since his marriage he has never been confined to his bed by sickness a single day. He was a man of remarkably abstemious habits, never having drunk a drop of liquor, or a cup of tea or coffee, and never having tasted tobacco in any form. Twenty minutes after his breakfast, every day in the year he devoted twenty minutes to gymnastic exercise. One of his most marked traits of character was his considerateness (sic) for those about him; even to the last not a word of complaint or impatience escaped his lips. Mr. Springer was born on a farm, in McHenry county, Ill., near Winona, and was fifty-two years of age. He married Miss Mary R. Ward, of Harvard, Ill., and leaves a wife and five children to mourn his loss; George W., Lewis B., Frank B., Mary and Laura; Geo. W. Springer was a graduate of the university in last year's class. The deceased was also a graduate of Northwestern university, in the class of '64; he was a member of the Phi Kappa Psi fraternity, and a prominent member of the Masonic order of Evanston. In the late war he served as captain of company F. 134th, Illinois infantry, and has been an active member of Grant Post no. 28, of the G.A.R. in Chicago. Mr. Springer held a number of offices of trust during his active career in Chicago, among which was that of chief clerk of the revenue department: his business of late years was real estate, his offices having been in the Rookery building. The funeral services will be held in the Congregational church at Wilmette, tomorrow afternoon at one o'clock. Dr. H. W. Ridgeway, assisted by others, will officiate; the Evanston commandery K.T. will attend in a body, in full uniform. 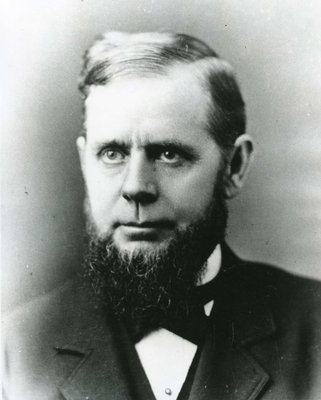