Funeral services for David Nelson, pioneer Wilmette and Evanston business man, were held Monday afternoon at the Hebblethwaite Chapel, Evanston, with burial at memorial Park Cemetery. Honorary pallbearers at the service were past presidents of the Wilmette Rotary Club.

Mr. Nelson, who was 86 years old, died at the Evanston Hospital early last Friday morning. Although in declining health, Mr. Neson maintained an active interest in his business, making almost daily appearances at his Wilmette office.

Born in Sweden, he came to the United states as a youth, worked for sometime as a coachman for a wealthy North Shore family, and, in 1892, funded the Nelson Laundry Company in Evanston. About a dozen years later he established the laundry's plant in Wilmette.

He wa a member of the Wilmette Masonic Lodge, of the Evanston Commandery of the Knights Templar, of the Consistory, and of the Shrine.

Mr. Nelson, who had made his home at 821 Elmwood Avenue, Wilmette, for the past 45 years, is survived by his widow, Esther; by a daughter, Mrs. C. E. McAlvey of Glencoe; by three sons, J. Walter of Northfield, Harold D. of Wilmette, and Earl A. of Evanston; by a sister, Miss Elin Nelson who still lives in Sweden; by seven grandchildren, and by four great-grandchildren. The Rev. Carl G. Stromee of the Wilmette Baptist Church conducted the services. 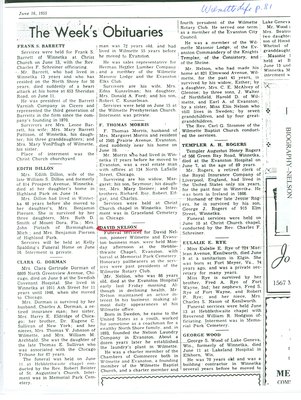