State of Illinois County of Cook Alexander McDaniel, of said County, being duly sworn, saith, that he was well acquainted with the family of Antoin [Antoine] Ouilmette and Archange Ouilmette, his wife, the last named person being the woman to whom the United States granted two sections of land as a reservation on the shore of Lake Michigan, [inserted in pencil] about fourteen miles north of Chicago; that affiant knew all these persons living in this county in A.D. 1836, and subsequently, who claimed to be, or were reputed to be, of the family of said Archange Ouilmette; and that said family consisted of said Antoin [Antoine] & Archange Ouilmette, father & mother, who in 1836 were old people, nearly seventy years of age, in the opinion of this affiant, and of eight children, then all full grown men and women, as follows

p.2 [p.2] namely, Joseph Ouilmette, Lewis Ouilmette, Francis Ouilmette, Mitchell Ouilmette, Sophia Ouilmette, Archange Ouilmette, Josette Deroshee wife of John Deroshee & Elizabeth Darling wife of Lucius R. Darling; that these were all the children of said Antoin [Antoine] and Archange Ouilmette; that they all left this part of the country within two or three years after affiant first became acquainted with them, except the father, Antoin [Antoine] Ouilmette who remained a year or two after the others; that it was currently reported and generally understood that they all went to Council Bluffs except Joseph, who was represented to have settled on a farm in the neighborhood of Racine, Wisconsin, and after staying there a few years, to have gone to Stevens Point, Wisconsin, in the pine regions, and from there to parts unknown [inserted in pencil] to this affiant.

p.3 [p.3] Affiant further says that in the year 1844 several of said children returned to Cook County, including Joseph, Elizabeth & her husband, Francis, Josette & her husband John Deroshee, & perhaps some others, but affiant does not remember particularly; that they remained here a few months for the purpose of disposing of their property, and did dispose of it, all except the share of said Joseph Ouilmette, as this affiant understood, at that time; that said Joseph Ouilmette did not then want to sell his part, and the 160 acres since bought by Henry A. Dingee was set off to him & conveyed to him by the other heirs, as was then generally reputed and understood in the neighborhood; that this affiant lived there, in the vicinity of said land, at that time, and knows of the division of said lands among said children by

p.4 [p.4] agreement between themselves, whereby said Joseph took said 160 acres above mentioned. Dated Wilmette July 5, 1871 Alexander McDaniel State of Illinois Cook County Alexander McDaniel being duly sworn doth depose and say that the foregoing statements by him made and subscribed on [?]. Sworn to and subscribed before me this 8th day of July A.D. 1871 Wm [William] Huntoon, Notary Public 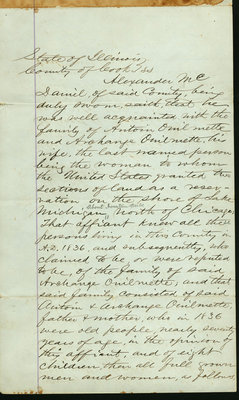