According to an article by J. Seymour Currey published in the Lake Shore News in 1914 a party of thirty men under the leadership of Orzo Crain set out from Wilmette in 1850 to make their fortunes.

Among them was Alexander McDaniel, who kept a diary during the two years he worked at his mine. The Wilmette Historical Museum owns a transcript of the diary in which he recorded his experiences.

McDaniel wrote letters to his wife, Emeline (nee Huntoon) McDaniel from Georgetown, California. Georgetown was a mining village in the Sierra Nevada, 12 miles north of Placerville and a thriving gold camp in the 1850s.

In a letter dated August 1, 1850, McDaniel tells of the journey from Salt Lake across the Sierra Nevada to the gold fields. The letter describes cutting grass to make hay for the horses before crossing the desert, and the extensive loss of property and sometimes of life for those unprepared for the hazards.

In a subsequent letter, McDaniel describes how much money he made mining and his plans for sending it home. He also describes the beauty of the California mountain country telling Emeline he would be happy to spend the rest of his days there if it weren't for the crude and dangerous society of the other miners.

His last letter dated October 19, 1851 outlines McDaniel's plans to come home and buy a piece of property in Ridgeville [probably along Ridge Road in Wilmette or Evanston]. He found it hard to finalize his plans since the diggings were paying very well at 12 dollars per day, with the possibility of more.

Alexander McDaniel (1815-1898) became a very prominent citizen in Wilmette upon his return from California, engaging in real estate development. He was also the Village's first post master. 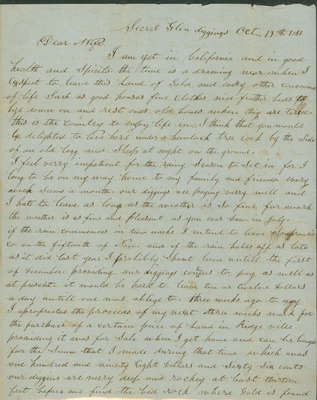 Letter from Alexander McDaniel to Emeline McDaniel October 19, 1851 Details
McDaniel outlines his plans to come home and buy a piece of property in Ridgeville. 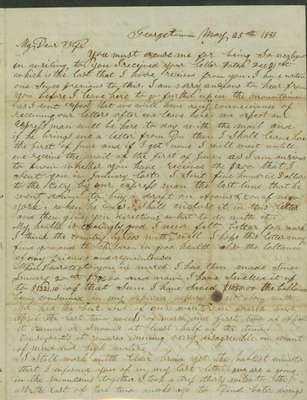 Letter from Alexander McDaniel to Emeline McDaniel May 25, 1851 Details
McDaniel describes how much money he made mining and his plans for sending it home. 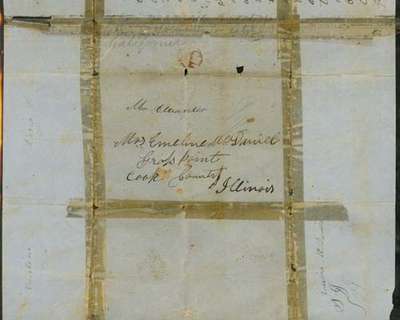 Letter from Alexander McDaniel to Emeline McDaniel August 1, 1850 Details
McDaniel tells of the journey from Salt Lake across the Sierra Nevada.